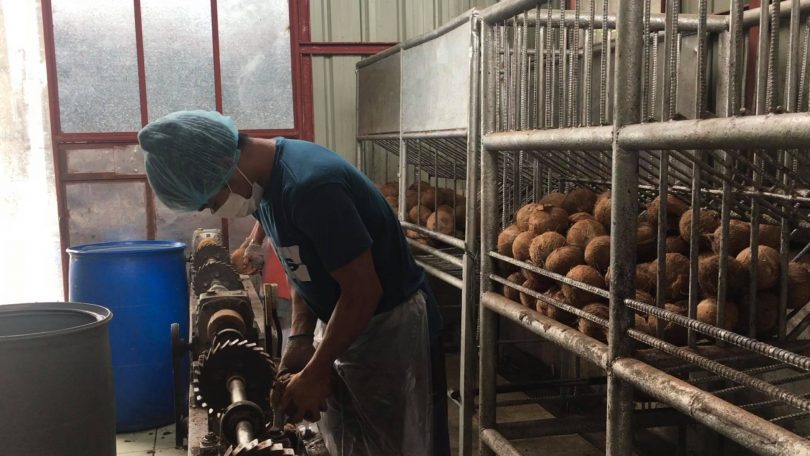 Quezon - With the sudden high interest for virgin coconut oil (VCO) because of claims to its ability to strengthen the immune system, other coconut products are also gaining prominence for its health benefits and other uses.

Delio Sinapilo, owner of CocoDeli, shared how their social enterprise began to climb their way as one of the top coconut processors in the province.

CocoDeli produces vinegar, tuba, coconut syrup, and coconut cider. One of their most popular products is coconut sugar, which also comes from coconut sap.

Coconut sugar is a good alternative to common table sugars with its additional minerals and antioxidants.

With the recent studies being conducted by the government to test VCO as an alternative supplement against COVID-19, producers like GreenLife in Tayabas, Quezon, are reaping the benefits from the increasing demand.

Greenlife ramped up their production of VCO as domestic and foreign sales are in upward climb during the pandemic.

Rubio encouraged consumers to support local coconut products, as it will also help many coconut farmers increase their income.

“VCO is not only a supplement. It can also be used in cooking and massaging. With people supporting this high-value product, we can help a lot of farmers move out of poverty,” he urged.

Coco Coir comes from the fibrous coconut husks inside coconut shells. It can be made into products such as floor and door mats and even mattresses. Tropical Prime Credit Cooperative, a processor in Quezon, employs coconut twiners to create coconets or “geonets.

Coconut jam and ketchup from Yakap at Halik Multi-Purpose Cooperative

Yakap at Halik Multi-Purpose Cooperative Quezon 2, a cooperative based in Padre Burgos, Quezon, is also active in aquaculture in the area. As an additional incentive, some members are also employed in coconut farming and production of other coconut products.

During the Coconut Bazaar in Lucena City in August, the cooperative showcased and sold their coconut-based products which include vinegar, jams and ketchup.

In 2019 alone, PEF supported coconut enterprises through loans and grants amounting to Php 21,228,000 to assist coconut farmers in five provinces.