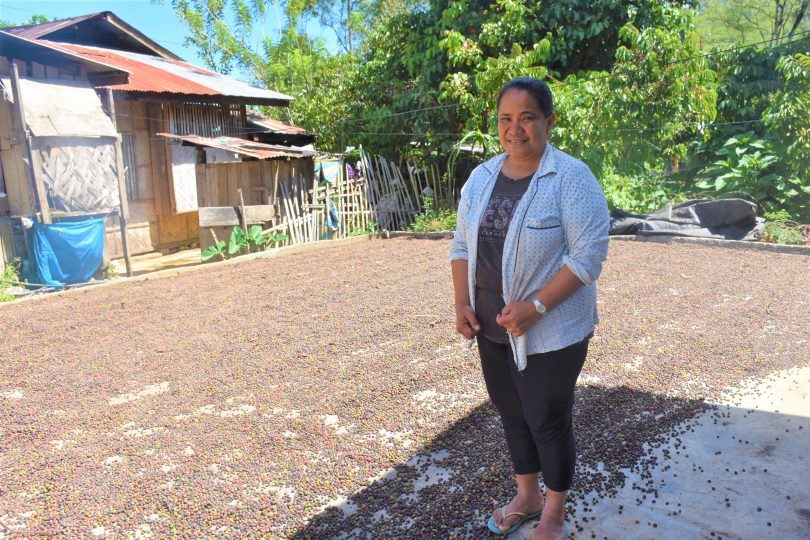 The town of Kalamansig in Sultan Kudarat is a haven of economic opportunities.

The Moro Gulf, where a variety of fish can be harvested such as tuna and bangus (milkfish), serves as the major fishing ground of the coastal communities facing the Gulf.  Both upland and lowland areas are considered agricultural hubs, with corn, banana, and coconut as major produce.

Another high-valued crop raised and roasted in the municipality is coffee. And the women of Kalamansig are making sure that Filipinos are drinking the best cup of it.

Leonora Baliguat owns a hectare of coffee farm with 1,000 trees in Brgy. Sta Clara. She has been farming since 1985, helping his husband, Emegildo.

Farmers like Baliguat sell their beans to local traders at PHP 85 per kilo, who in turn supply them to big companies like Nestle (which produces the widely known beverage, Nescafe).

Another woman coffee farmer, Allen Biore, who lives in the upland community in Brgy. Wasay, shared that transporting their harvests also reduces the income derived from coffee.

Biore is the president of Tinandok Women's Organization, a group of 32 women farmers that produce coffee in Brgy. Wasay. According to her, an increase in market price will serve as a cushion for family expenses.

Support to the farmers

The Peace and Equity Foundation (PEF) linked Kalamansig Farmers Agricultural Development and Marketing Association (KFADMA) to new markets that give higher prices to their coffee.

"We entered the value chain of coffee here in Kalamansig, and the nearby town of Lebak, knowing that traders control the prices. We introduced the farmers to a new local trader in Batangas who buys the coffee beans at PHP 95 per kilo," PEF Area Officer Shunie Pearl Palacios said.

PEF and KFADMA are now looking to build model farms in Kalamansig for coffee producers to learn new farming techniques that will improve both production and quality.

"We will be partnering with other CSOs and the local government to make this happen," Palacios said.

This collaboration is expected to benefit the lives of many farmers like Baliguat and Biore and offer more opportunities to other women in Kalamansig.