Home / Stories / Farmers went bananas – and happy about it

Farmers went bananas – and happy about it 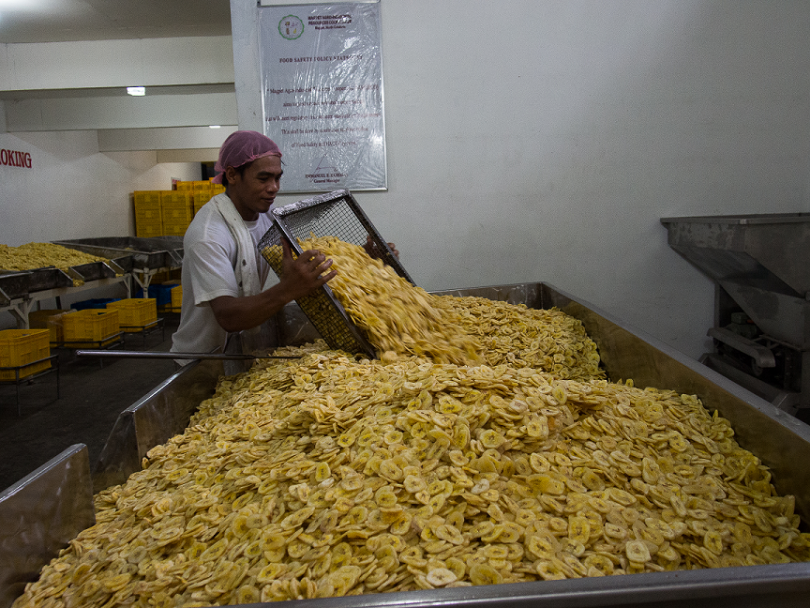 When the going gets tough, there’s nothing else you can do but “go bananas”. This is what residents of Magpet town in Cotabato did, and they’re just thankful they did so – literally.

As revealed in statistics a few years ago, 97% of Magpet’s 1,600 households were living below the poverty line. That was almost everyone in a town composed mostly of small-scale banana producers. With most of them poor and barely able to finish grade school, people had little hope of improving their lives. Most are indigenous Manobo who maintain ancestral lands in Magpet and neighboring communities.

It was at this point that the local cooperative started to consider producing good banana chips.

In 2009, the Magpet Agro-Industrial Resources Cooperative (MAGIRCO) put up a structure for the community’s banana-chips production. The banana producers had a reliable market for their product. New jobs were created as the cooperative started hiring banana peelers, mostly women, who were given a way to supplement the family income.

Starting 2011, the Manobo farmers harvest almost 100 kilos of bananas every 15 days. The cooperative buys more than 2,000 kilos a day, at six pesos per kilo, which is twice the price than what they got before the banana-chips project started. The bananas are processed into second-fry banana chips, consolidated in Davao del Sur, and exported to China and Korea.

In 2013, MAGIRCO has recorded more than P 50 million in sales and earned P 2 million in net profits.

Since the start of the project, MAGIRCO members have undergone training from PEF on managing and expanding the enterprise. Plans are underway to expand its European market, foreseen to benefit more farmers and families.

Just because some time ago, they went bananas.