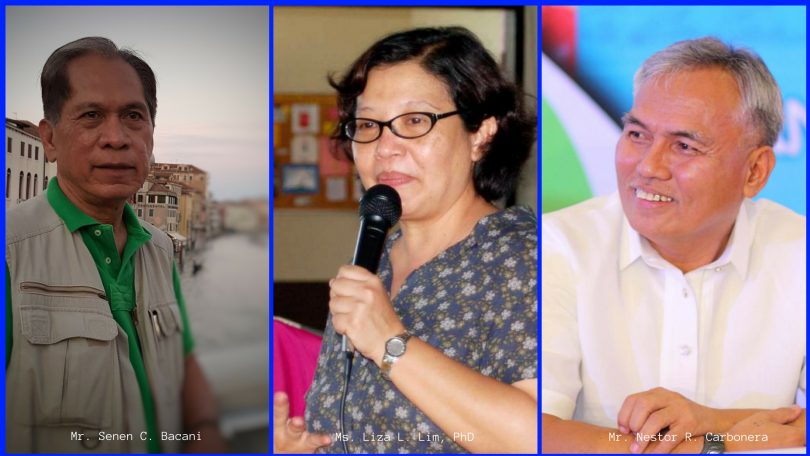 Mr. Senen C. Bacani first served in the PEF board from 2001 to 2008 as one of its founding trustees representing the business sector. Since then, he continued his active involvement as a member of the PEF Finance & Investments Committee. Apart from Mr. Bacani’s engagement in various organizations notably Ramon Magsaysay Award Foundation, Inc., National Cooperative Movement Service, and Philippine Rice Research Institute, he is also the chair and president of La Frutera, Inc., the largest banana exporter in the country. Mr. Bacani received the Ramon V. del Rosario Sr. Award for Nation Building in 2010, the SGV Ernst & Young Entrepreneur of the Year in 2006, and The Outstanding Filipino (TOFIL) award for Agriculture in 2009.

Representing the Mindanao NGO networks/coalitions in the PEF board, Mr. Nestor R. Carbonera is currently the Executive Director of Xavier Agriculture Extension Service in Ipil, Zamboanga Sibugay. He also serves as chairperson of the Social Development Committee of the Regional Development Council 9. Mr. Carbonera was a recipient of Bayaning Pilipino of the Year Award by the ABS-CBN Foundation in 1997.

Ms. Liza L. Lim, PhD, chair of the Philippine Partnership for the Development of Human Resources in Rural Areas (PhilDHRRA), joins also the PEF board representing national NGO networks/coalitions. She is a part-time instructor at the Ateneo de Manila University under the Department of Sociology and Anthropology and Department of Environmental Studies. Ms. Lim also sits as the Executive Director of Institute of Social Order, an NGO implementing programs on community-based coastal resources management.