A Gentle shaft of light shines on Kadtabanga through Shariah

The ex-combatants in Kadtabanga Inc. are waging another ‘war’ against poverty that they hoped will be more sustainable and long-lasting through the implementation of Shariah Financing in Mindanao.

It’s not every day that one encounters a great woman Moro leader who not only commands respect and allegiance from her fellow leaders from the opposite sex, but one who exudes confidence and hope among her people for years. Such kind of leadership, from a woman Moro at that is something that can be called a gem, which shines from the dark pit of the people’s struggle.

Hadja Giobay Diocolano, 55, has devoted most of her life to the struggle of the Moro people for self-determination with the Moro National Liberation Front as a combatant at a very tender age of 12 until the peace process in 1996. She has continued to work for the betterment of her people as executive director of Kadtabanga Foundation for Peace and Development Advocates, Inc. or KFPDAI that is gearing towards another kind of battle against poverty.

She has since then for over a decade, painstakingly led her people not the ways of the warriors with weapons of mass destruction to combat this age-old enemy that is poverty, but a more potent weapon in development and prosperity. And lately, with Shariah compliant microfinancing which belief has already been ingrained in their Islamic faith they have been practicing all their lives, and just needed to realign themselves again.

Leading KFPDAI for 14 years was not a piece of cake for Giobay, being the lone woman in the midst of male leaders among MNLF ex-combatants who were at the helm of the organization. She recalled how daunting it was, especially during the early years that they have to grapple with themselves in their struggle to hold on to the path of non-violence, despite circumstances where their determination to hold on to peace had been challenged several times.

In a rare chance where I attended a recent meeting among leaders of KFPDAI and Mr. Chris Pasco of Peace and Equity Foundation, Inc. (PEF), an organization that calls itself as ‘development investor”, which does development financing, the processes on the path to Shariah implementation that are being undertaken by KFPDAI was discussed extensively. One such process is the conduct of a study on the “Feasibility and acceptability of Shariah based microfinance in Maguindanao”, which hoped to establish the kind of Shariah lending that would suit the communities in Maguindanao.

Though KFPDAI’s engagement with the PEF had started over a decade ago with the successful implementation of the water system funded by PEF among a number of its Peace and Development Communities (PDCs) covered by the Kadtabanga, it was only a year ago in 2014 that the Shariah compliant microfinance was started.  Actual on-site training among KFPDAI’s officers together with PEF’s other stakeholders on the conduct of Shariah Financing in Jogjakarta, Indonesia was done on April this year.

Together with Hadja Giobay S. Diocolano who went for Shariah training which was supported by CORDAID Netherlands were Dr. Khanappy K. Ayao, Kadtabanga Chairman of the Board and Ustadz Ibrahim Bilao, the Shari’ah Concil Head of the organization.  They were joined by other PEF staff and partner orgnizations, in partnership with Al Qalam Institute and the Universitas Islam Indonesia.

“Islamic financing is for everyone.  There is a big challenge for Shariah scholars and practitioners (Shariah technicians) to develop Shariah compliant products.   Islamic finance done properly or based on Maqasid Al Shariah, especially at the community level, will help us get closer to our social objective”, said PEF’s Ricardo Torres who recently attended another training on Islamic Finance at the Durham University, UK.

In a meeting of different stakeholders gathered at the Al Qalam Institute based in Ateneo de Davao University sometime in March this year that discussed the Shariah Compliant Social Enterprise Framework, a number of questions about Islamic Finance were clarified.  It included among others the “current policies that the (Philippine) government has with regard to Islamic Finance” that was supposed to have been carried out by the Amanah Bank, the lone existing Islamic bank in the country.

Through the years though, the ex-combatants in Kadtabanga Inc. had won “battles of peace” that spread peace and unity for the Moro people among “zones of peace” as the tide of change swept through in their favor with a number of foreign donors that helped them establish the path to peace.  With the new development of the implementation of the Shariah compliant which has been funded by PEF, they are waging another ‘war’ against poverty that they hoped will be more sustainable and long-lasting.

While Giobay Diocolano acknowledges the fact that peace and development can only be gained through persistent “trust and confidence” building among her people, and that there is no short cut to it, she has great faith in what KFPDAI has worked for and built through the years:  a workable development through community efforts.

Recently, KFPDAI’s development efforts has been recognized during the 6th Ramon Aboitiz Foundation Inc. (RAFI) Triennial Awards, KFPDAI was announced as the “Eduardo Aboitiz Award for Outstanding Institution”. (Gingging Avellanosa-Valle, an advocate of women’s empowerment, is currently involved in women’s issues in the Bangsamoro). 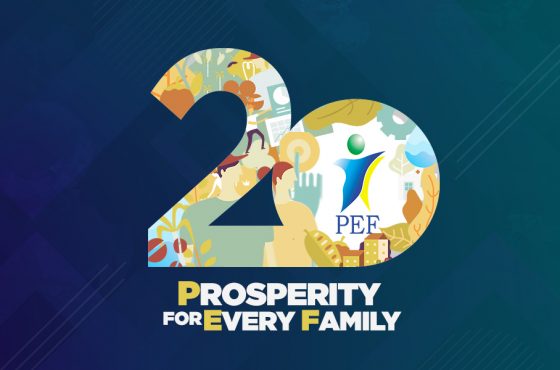