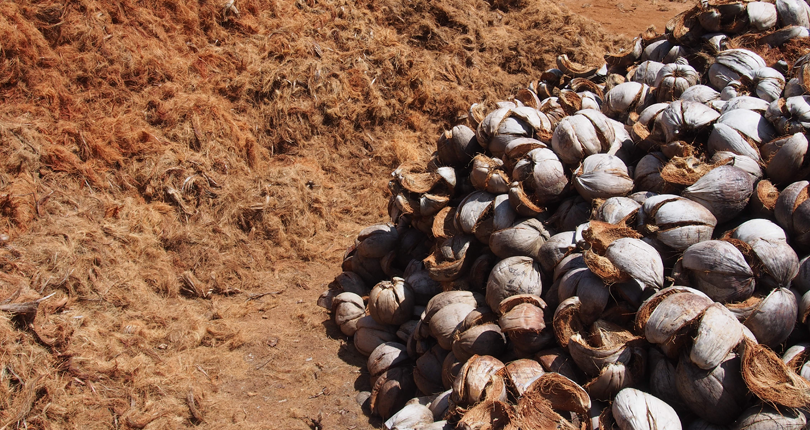 In the 1990s, the dean of a small college learned to his dismay that his region of Bicol, although rich in agricultural resources, was among the poorest places in the country.

Faced with dismal statistics, Justino Arboleda, dean of the College of Agriculture in Bicol University and an agricultural engineering graduate from the Tokyo University, did not merely draft policy recommendations but put himself to work. Scanning his surroundings, he saw the one thing his dirt poor region was rich in. This coconut-production region’s perennial waste was the coconut husk. Arboleda estimated that the region destroyed or threw away at least 8 billion coconut husks every year. And yet, coco fiber has been identified by the Food and Agriculture

Organization of the United Nations as one of the fibers of the future, along with sisal, jute, and abaca. These fibers have been found to be good substitutes for materials produced from fossil or mineral resources.

Coco fiber is not only a sustainable material. It is also very versatile. It may be made into doormats, mattresses, seat cushions, and construction materials. It absorbs moisture, pressure, sound and odor, which makes it ideal for insulation. It can even be used as fertilizer. It also has antifungal and antibacterial properties.

Taking a leap of faith on this humble local material, Arboleda dipped into his own savings and those of his siblings, and started a backyard coco husk processing facility.

In 1994, he started Juboken Enterprises, a pilot coconut fiber company that produced bio-degradable anti-erosion material from coconut husk fiber. The rest, as they say, is history.

With the success of its pioneering effort, Juboken established the Coco Technologies Corporation (Cocotech) to put the industry into the mainstream by developing and marketing new products from coir and peat, such as peat blocks for plant nurseries, fiber rolls for wall proof and roof insulation, and geo-nets for erosion control. Cocotech now supports key coco coir production in Bicol, retailing 90 percent of the total production of Juboken Enterprises, the largest buyer of coco coir in the area.

Today, Cocotech runs a 7,000-square meter facility and employs 2,000 households. Together with another investor, the Foundation for a Sustainable Society, Inc. (FSSI), it has breathed new life into the coconut industry. It has demonstrated the potential of small social enterprises to develop and create impact in local communities. Demand for coco fiber has grown in the world market as more countries come to realize its properties. However, the Philippines still accounts for only a very small slice of this market. Sri Lanka, the world’s biggest exporter of coco coir, sold some 150,000 MT in 2010, roughly 30 times the volume the Philippines exported in the same year.

Even so, the rejuvenated industry has made a strong positive impact not only on the local economy but also on the participating families themselves. Arboleda says that in areas which have been working with Cocotech for some years, he has noted a growth in the number of sari-sari stores and canteens selling cooked food, and the emergence of better-built houses. “For most communities, our project has improved their quality of life,” he says.

And since most families spend nearly everything the  earn on food, they usually have little or nothing left to finance the children’s schooling, buy some clothes or medicine, or pay the electric bill. Thus families who earn extra income by twining or weaving coco fiber are now able to cover these expenses.

The growing industry needs all the help it can get from government as well as from institutions like PEF, says Arboleda. PEF, with whom Cocotech has maintained a long-term partnership, can offer access to capital and provide management services like cash flow management, as well as assistance to strengthen its community supply chain.

Meanwhile, the government through the Philippine Coconut Authority has launched its own programs to help rejuvenate the coconut industry. Most recently, President Benigno Aquino III issued an executive order for the

Department of Public Works and Highways (DPWH) to use coco-coir nets to prevent erosion along highways and critical slopes.

However, Arboleda says the government must work harder. He says the Department of Agriculture distributed over 100 decorticating machines all over the country. While in 2013 the Philippine Coconut Authority set aside Php160 million to purchase machines that could help boost coco coir productivity, the benefits of such technologies have yet to be tapped fully. The machines, which are used to separate coco fiber from the husk, are lying idle today because the farmers who received them lack the necessary capital for operations. Arboleda says the local coco coir industry can get off the ground only with an insightful and comprehensive plan.

With stronger government support, the determined efforts of social enterprises like Cocotech might just make the world sit up and notice the true value of this precious life-giving tree. PEF is committed to make this happen.