Working Hard for the Honey 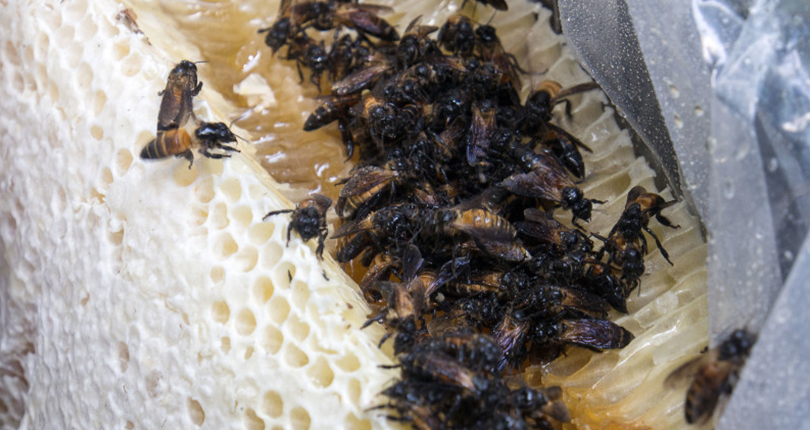 BATAKS PERFORM ‘lambai rituals’ [that honor the] spirits of honeybees with prayers, dances, songs, and instrumental music. Tagbanuas believe that a hive is a gift to the finder by the guardians of the forest, hence offer prayers and thanks to these guardians.

Nagkakaisang mga Tribu ng Palawan (United Tribes of Palawan) or Natripal is an indigenous people’s organization with members from the Tagbanua, Batak, and Palau’an communities, the ethnic groups of Palawan Province. In 2012, Peace and Equity Foundation approved Php800,000 in assistance to Natripal. Most of the money is a loan to boost Natripal’s wild honey livelihood project and another Php100,000 grant went to training of gatherers on proper honey harvesting.

PEF sat down for a face-to-face chat with Natripal officers Rodrigo Emag, president, Loreta Alsa, livelihood manager, and Isagani Santos, R&D coordinator, on among others, the worrisome decline in production by Apis cerana (pukyutan) and Apis dorsata (ligwan), the main honeybees found in Palawan.

Tell us about your livelihood activities.

We sell the honey mainly to individual traders and a few contractors. Our indigenous communities do the harvesting. Natripal processes it and handles the selling. Because there’s no middle-man we can buy it from them at a higher price. We pay the community Php80 per kilo. But we pay that price only if the honey meets our quality standards. If not, we lower the price slightly.

How much honey do you produce every year?

The main problem with wild honey is that it’s seasonal. It comes when flowers are in bloom. In 2010, we produced 11 metric tonnes [11,000 kilograms]. Before, we reached only 2 tonnes, 3 tonnes. It increased that year because an NGO loaned us capital to buy more honey from gatherers.

With wild honey, the amount produced by bees fluctuates very much. In the last five years, we got very high volume, low, much higher, then down to almost zero—which is what happened to us in 2011. We got only 670 kilograms in 2011.

In 2012, we produced only half a tonne [500 kilograms]. The fluctuation is really very large. We’ve done mitigating measures like planting blooming flowers that are ‘lovable’ to bees. But we’ll see the effect of that in the next ten years only.

Walk us a bit through the wild honey project that PEF is assisting.

In the past, we successfully repaid large loans. PEF saw we had a good record of honoring agreements and said it could help with capital to increase our production of honey.

Why did we propose a wild honey project? Because we expected the volume of honey to go up suddenly. That’s our experience in 2010. That year we didn’t expect the volume to be so huge. If only we had enough capital that year, we could have bought enough to produce 30 tonnes or even 40 tonnes. And we think we could have sustained that.

Right now, we’re not sure what production volume we can reach. We really can’t predict it. The most serious problem is we can’t get any supply of wild honey. PEF asks if we still need the money or whether it is too big or small. But the thing is, there’s just no honey to buy! We have a credit line of almost a million but we’re not using it because the honey just isn’t there.

If there’s no honey to gather, where do your members get income?

We shifted to almaciga, even though it wasn’t part of the original project design. When we rolled out the project, we discovered that it’s more stable to engage in almaciga, rather than wild honey. So it’s now part of the project.

We have six community associations participating in almaciga gathering and production. In one year, maybe we can produce 30 metric tonnes. Right now, we haven’t canvassed any buyers although there’s one exporter who told us he was interested.

Going back to wild honey, why is the supply so erratic?

Because weather greatly affects honey production. Bees need forests that have good vegetation and blooming flowers that can give them plenty of nectar. That’s what they convert to honey.

Rain patterns keep on changing. We’ve had too much rain during the honey-gathering season—from February until maybe June—and flowers didn’t bloom. When bees have nothing to eat, they can’t produce honey. Agricultural insecticides also affect honey production. Bees don’t like the smell of chemicals in insecticides, like gasoline, and other chemicals farmers spray on trees.

This year, the government’s weather forecasting office said the weather might be good. But it’s hard to be optimistic. According to indigenous wisdom, a very large harvest of wild honey [like what we experienced in 2010] happens only every 25 years. We really can’t predict what will happen.